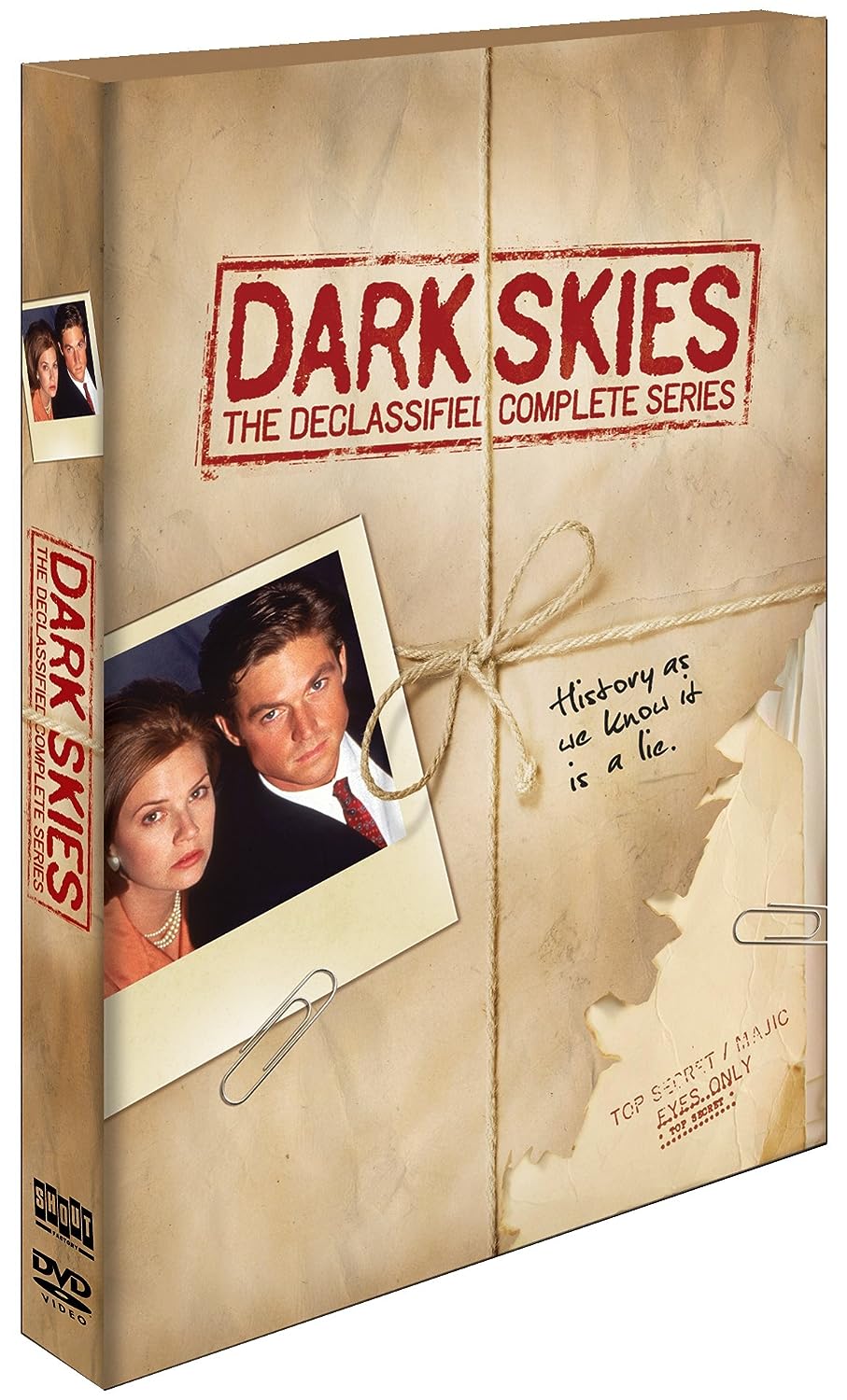 On July 2, 1947, a spacecraft of unknown origin crashed in the New Mexico desert outside Roswell Army Air Base. Four bodies, known as the Grays, were recovered. From that moment on, everything you think to be true about American history has been influenced by that event. On February 17, 1962, another event occurred, related to the first, but one that has, until now, been kept completely suppressed. You are being trusted with that secret.

In 1996, television audiences were introduced to John Loengard (Eric Close) and Kimberly Sayers (Megan Ward), two heroic freedom fighters charged with the unearthly task of protecting humanity against an alien infestation known as the Hive while showing us, through their own experiences and actions, the truth behind our own recent past. Call it alternative history or call it the unthinkable truth. Either way, call it Dark Skies.

The X-Files told us, "The truth is out there." Dark Skies, the ambitious and audacious NBC series that lasted just one season, warned us we couldn't handle the truth. It created an incredible alternate universe in which 20th-century history as we know it is reinterpreted through the framework of a conspiracy to cover up an alien invasion. Francis Powers? He wasn't spying on Russia. He was involved in an aerial dogfight with a UFO. The assassination of President Kennedy? The Beatles on The Ed Sullivan Show? The disappearance of three civil rights workers in Mississippi? The Vietnam War? Pollution? Each is revealed to be a pivotal event in the secret war being raged on members of the alien Hive who first arrived at Roswell. "They're here, they're hostile, and powerful people don't want you to know," as the Emmy-winning opening credit sequence informs us. But John Loengard (Eric Close), an idealistic congressional aide, stumbles onto the conspiracy, and together with his girlfriend Kim Sayers (Megan Ward) becomes embroiled in the alien-quashing campaign being waged by Majestic, "the most secret organization you've never heard of." John is one of those "the public has a right to know" kind of guys, but Captain Bach (the late, great J.T. Walsh) will stop at nothing to ensure that doesn't happen. Dark Skies has a more accessible mythology than The X-Files, and it's a kick to see such 1960s icons as Jim Morrison, Timothy Leary, and John Lennon figure (unwittingly or not) in the action. The series also benefits from its meticulous period re-creation (it's Mad Men for the Close Encounters set) and above-average special effects. For a short-lived series, this six-disc set includes an impressive lineup of bonus features that will thrill the show's devoted following, including an excellent three-part series retrospective featuring the show's creators, Bryce Zabel and Brent V. Friedman, as well as Close and Ward; the international version of the impressive feature-length pilot directed by Tobe Hooper; original NBC promos; the electronic press kit used to promote the show; and a what-might-have-been proposal for a second season. --Donald Liebenson

We raise our own fiber animals on our farm in Maryland and send the raw fleeces to a local mill to be processed and spun into yarn. Several years ago, I dreamt of offering all naturally dyed yarn and fiber to complement our natural color, home grown wools for sale on our website and etsy shop. After being introduced to natural dyes about ten years back, I added color goals to my dreams. But not just any colors. Our flock is raised as naturally as possible, hence the name of our yarn – Free Range Yarn! The colors had to match our determination to live naturally. Between taking workshops, and taking risks, I have come up with my own methods for creating and using natural dyes on wool. I love to take the scientific requirements and add the artistic elements. The barnyard is home to sheep, goats, chickens, ducks and occasionally some species that we raise for meat. We have raised cattle and hogs in the past years. Our quest was to live and care for this land the best that we can. It's always a learning experience even after the decades of time we have invested here. We enjoy sharing what we love and motivating and encouraging other homesteaders.I have written several books filled with the experiences and skills that fill our days. I hope you will take time to check out our website shop both on this website and our etsy shop.

Getting ready for fall starts in the late summer. Fall chicken care thoughts begin to run through my head. Chilly weather will require some changes to routine, and buildings need to be checked for repairs. Using the days with pleasant weather to get these things done keeps us from repairing and scrambling during a storm. […]

Fresh From the Blog:

Waiting until spring for the best time to start chicks, can be too much to handle. Nothing starts a severe  case of chicken fever like a brooder full of baby fluff butts. Chicks are extremely susceptible to the cold weather and unless you live in an area that has warm weather year round, … END_OF_DOCUMENT_TOKEN_TO_BE_REPLACED

Is sheep care part of your future? Can you raise sheep in a large backyard? In some cases the answer is yes. Sheep are adaptable and can be cared for in a paddock or small field if their needs are met. It may be a little more labor intensive and take a bit more effort and management to raise our … END_OF_DOCUMENT_TOKEN_TO_BE_REPLACED

Are you chicken gardening? Chicken gardening means growing foods that can be used to supplement your chicken's diet. Chicken gardening is slightly different than gardening only for people. Our flock of chickens, ducks, turkeys and guinea hens love all sorts of vegetable products and scraps. In the … END_OF_DOCUMENT_TOKEN_TO_BE_REPLACED

Make a Chicken Coop from a Garden Shed! The day I brought home the first two chicks, I  went against all the advice I give to people thinking about getting chickens. We had a farm but had no chicken coop or really any plan to build one. But two chicks followed me home from work at a feed store … END_OF_DOCUMENT_TOKEN_TO_BE_REPLACED

You can grow natural dyes for wool in your back yard garden. As farm folks at heart, it's natural for us to prefer do it yourself projects. The winter often finds us leafing through seed catalogs, planning our gardens for spring and summer. If you also love wool, consider adding some seeds for dye … END_OF_DOCUMENT_TOKEN_TO_BE_REPLACED